Crocus sativus L. (Iridaceae), well-known native to the eastern Mediterranean-Europe and western Asia region, is a perennial stemless herb that is widely cultivated in many temperate countries including Spain, Greece, Turkey, Iran, India, China, and Japan (1,2) (Figure 1). The massive cultivation of C. sativus is timely developed to produce such the well-known and costly spice “red gold”, called saffron as stigmas of its flower. Since saffron has unique color, aroma, and taste, it is widely used as a spice, coloring and flavoring agent in food and cosmetic products. In addition, it displays a variety of health benefits and has been used in both traditional and modern medicines (3,4).

Phytochemical components of saffron have been extensively reported (5-8), in which safranal, picrocrocin, and crocetin glycosides (crocin) are major components and responsible for typical bitter taste, spicy aroma, and red color, respectively (Figure 2). Crocetin glycosides such as crocins 1–4 are dominated non-volatile components and be marker compounds for quality control and standardization of saffron (5). In addition, the other aspects of natural product chemistry of the crocin such as chemical structure, biosynthesis, and biodiversity have been investigated and reported (6-8). This review then will be focused on the crocetin glycosides as the principal composition of the title material under the viewpoint of natural product chemistry. 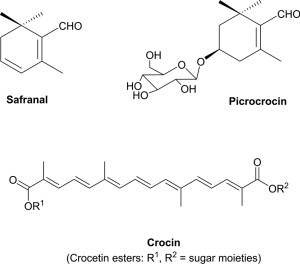 We present the following article in accordance with the Narrative Review reporting checklist (available at https://lcm.amegroups.com/article/view/10.21037/lcm-21-70/rc).

This narrative review consists of a PubMed search of English publication up to date of January 2022. The keywords used for the search were consecutively: “saffron and crocin OR Crocus and crocin”. This first step released 227 articles. Then, manual screening of the 11 words cited above in Table 1 referring to saffron and crocin were realized for the 227 articles. Sixty articles were ultimately used, as listed in the references.

Since first phytochemical report on saffron by Zarghami in 1971 (6), together with development and advancement of chromatography, the phytochemical profile of saffron has been very attractive to Worldwide natural product chemists and being studied in detail and, to date, reveal the occurrence of totally more than 150 volatile and non-volatile compounds (7). In which, there are about 60 constituents have been identified by conventional isolation and structural elucidation. The volatiles consist of more than 40 components that are mainly monoterpenes, their alcohol and ester derivatives, of which, safranal (2,6,6-trimethyl-1,3-cyclohexadiene-1-carboxaldehyde, 60-70% of the volatiles) is the main component. Non-volatile components include crocetin, crocin, picrocrocin and flavonoid. The detailed all the compounds from saffron is listed in the interesting review article by Mykhailenko et al. (8).

Being well documented and notably, crocin is the unique water water-soluble carotenoids found in the title material and the primary component responsible for the red color of saffron. Chemically, crocin is a series of compounds that are glycosyl esters of crocetin are the major components of saffron (9,10). The quantitative study revealed the main crocins including crocin-1, crocin-2, crocin-3 and crocin-4 as shown in Table 2 and Figure 3 (12-15). The detailed outline and insight discussion on their structure, spectroscopic data, distribution, and so on will be addressed mainly in the main following section.

Picrocrocin is glycosylated form of safranal and chemically different from crocin but in the viewpoint of biosynthesis, the biosynthesis pathways of three principal components of saffron have been established and relatively from the same precursor of zeaxanthin (16,17). Figure 4 showed the brief biosynthesis pathway with the key intermediate and precursor (18). 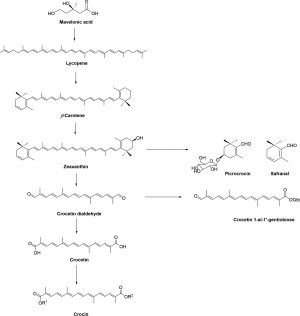 Figure 4 The biosynthesis pathway of the main secondary metabolites in Saffron (C. sativus).

The profile of crocin, picrocrocin and safranal contributes to quality control of saffron (19,20) and it has been suggested that the best quality saffron should contain about more than 20% crocin, 5% picrocrocin, and 0.5% safranal (21).

Crocins are crocetin glycosides, in which structure variation depends on the sapogenin backbone of crocetin (C20H24O4; MW: 328.4 g/mol) and, mainly, the terminal sugar chains (glucose, gentibiose, and neapolitanose) (8). Crocetin framework inheriting from zeaxanthin in the proven biosynthesis pathway with a long chain of conjugated carbon-carbon (seven conjugated double bond and two terminal carbonyl function, 4 side-chain methyl groups) is relatively unstable with temperature, oxidants, UV radiation, and pH condition resulting fragmentation of certain double bond of polyene backbone other than variable functional groups. The long-conjugated system of the crocetin backbone makes the crocins appear in red color and can be detected by UV-VIS spectra (characteristic maxima VIS absorbance in the range 400–500 nm), which are helpful in both qualitative and quantitative analyses. In addition, the stereochemistry of crocetin and crocins is only from conformation of double bond and highly oriented in one form, whether cis or trans and, normally, the trans-form is more stable than the cis-form. The cis/trans conformation make influence on their conjugated systems and results in their different UV-VIS spectra at secondary peak beside the characteristic peaks, the cis isomer gives a single peak between 320 and 340 nm and, in case of all-trans isomer, the secondary peak is at ca 256 nm. As shown in Table 3 and Figure 5, since first crocins were isolated in 1975 (30) and then structurally identified in 1982 (24), up to date, there have been 22 compounds including crocetin and crocin derivatives reported from saffron from noteworthy investigation of Speranza in 1984 (31), Tarantilis in 1995 (21), Carmona in 2006 (26), Dufresne in 1999 (11), Shoyama in 2013 (32), and Llorens in 2015 (12), respectively. Among them, four main crocin pigments (crocin-1, crocin-2, crocin-3, and cocin-4), named according to the number of sugar unit in their respective molecules along with minor components of α,β-carotenes, lycopene, zeaxanthin, phytoene, phytofluene, (4R)-4-hydroxy-3,5,5-trimethylcyclohex-2-enone 4-O-β-D-glucopyranoside, (4S)-4-hydroxy-3,5,5-trimethylcyclohex-2-enone 4-O-β-D-glucopyranoside, (4S)-4-(hydroxymethyl)-3,5,5-trimethylcyclohex-2-enone 4-O-β-D-glucopyranoside, and β-D-gentiobiosyl ester of 2-methyl-6-oxohepta-2,4-dienoic acid, respectively (30,33). In our previous study on saffron by dark cultivation in Japan, it is noteworthy that a unique minor crocetin glycoside was isolated and identified as trans-crocetin 1-al 1ʹ-O-β-gentiobiosyl ester based on the extensive chemical and spectroscopic evidence (Figure 6) (33). Table 4 summarizes the NMR data of the typical crocins from the original research (32-35) for forthcoming references. In term of the NMR spectroscopic data, since the structure of crocetin and the crocins are highly symmetric, the NMR signals appears whether in couples or integrated peaks. The 13C NMR spectra display even number of peaks at the range of ẟ 120–150 ppm for olefinic double bonds and, especially, two downfield signals at ẟ 165–190 ppm accounting for two terminal carbonyl carbons. It becomes evident that the relative downfield shift of the carbonyl carbon discriminates the carbonyl functions (ester, carboxylic acid, aldehyde) (32-35).

Crocetin and crocin derivatives of saffron 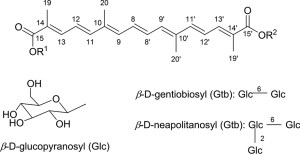 Quantitatively, standard saffron contain total crocin content not less than 16% but some saffron were reported to be more than 20% crocins with crocin-4 up to 16% (36,37). Furthermore, the chemical fingerprint of individual crocins in saffron have been studied by various colorimetric (38,39) and chromatography techniques (HPTLC, HPLC, UPLC…) (40-44), especially modern hyphenated, GC-MS, FTIR, LC-MS and LC-MS-NMR methods (45-48), so that minor compounds and trace components have been identified. Recently, Aiello and co-workers reported a LC-MALDI MS method for fingerprinting and quantitative analysis of saffron and revealed occurrence of potential and not reported crocetin esters with long sugar chains of four-to-seven sugar units, molecular weight up to 1800 amu in advance (49). These findings are consistent with the biosynthesis pathway of crocin and support variation in biosynthesis as well as potential of new crocin derivative in saffron and Crocus genus.

Under viewpoint of chemotaxonomy, accumulating data shows that crocetin and its glycosides have been occurred in very few medicinal plants including Crocus genus of Iridaceae [C. sativus, C. neapolitanus (50), C. speciosus, C. luteus (51)], Gardenia jasminoides (Rubiaceae) (34,35), Arctium lappa (Asteraceae) (52,53), Mimosa pudica (Leguminosae) (54), Buddleja officinalis (Loganiaceae) (55), Stemona japonica (Stemonaceae) (56), Nyctanthes arbor-tristis (Oleaceae) (57), Jacquinia angustifolia (58), Coleus forskolii (59), and Artocarpus heterophyllus (60), respectively. Of which, the saffron and the fruit of G. jasminoides are most dominated in contents of crocetin and various crocetin glycosides. In the title herb of C. sativus, crocetin and crocetin glycosides are only found in the saffron. So that, crocetin and certain its glycosides contribute impact meaning in chemotaxonomy of Crocus species and others.

Saffron is the well-known traditional medicinal herb and potential application in the modern medicine based on its scientific database, especially the phytochemical profile. This brief review as updating due time and, once again, further supports that crocin is the principal content and defined the saffron quality. In addition, the potential of new crocin have been evidenced by chromatographic fingerprint and need to be more studied.

Provenance and Peer Review: This article was commissioned by the editorial office, Longhua Chinese Medicine for the series “Multifunctional Saffron”. The article has undergone external peer review.

Conflicts of Interest: All authors have completed the ICMJE uniform disclosure form (available at https://lcm.amegroups.com/article/view/10.21037/lcm-21-70/coif). The series “Multifunctional Saffron” was commissioned by the editorial office without any funding or sponsorship. YS served as the unpaid Guest Editor of the series. The authors have no other conflicts of interest to declare.

Ethical Statement: The authors are accountable for all aspects of the work in ensuring that questions related to the accuracy or integrity of any part of the work are appropriately investigated and resolved.