TCM views the human body as an organic entity made up of various organs that function in a mutually interdependent manner (1). The Yin-Yang theory, which originated from ancient Chinese philosophy, is central to the conceptual framework of TCM. According to the Yin-Yang theory, the functioning of the human body is governed by the interplay of two complementary, but opposing, forces, namely, Yin and Yang. The dynamic equilibrium between Yin and Yang determines the physiological status of the human body (2). Any disturbance in the balance of Yin and Yang can lead to various pathological conditions. For example, an excess of Yin can lead to an over-consumption of Yang and, conversely, a relative excess of Yin or Yang is referred to as Yang deficiency or Yin deficiency, respectively. Therefore, within this conceptual framework, TCM classifies bodily structures, explains clinical symptoms, and guides the treatment of diseases on the basis of the Yin-Yang theory (3).

According to TCM theory, the interaction between Yin (postnatal essence or Yin Qi) and Yang (prenatal essence or Yang Qi) generates Zheng Qi (i.e., “the Qi of the body”) which maintains life activities and defends against pathogens, as well as allowing adaptive changes in the body in response to internal and/or external factors. Zheng Qi can flow through meridians and thereby energize physiological activities. TCM theory also states that aging and aging-associated disorders can result in a gradual depletion of Zheng Qi and the complete deprivation of Zheng Qi (which is mainly due to the exhaustion of prenatal essence) will ultimately result in death (4). As the prenatal essence is inherited from parents and hence cannot be replenished after birth, a sufficient supply of postnatal essence is needed to minimize the utilization of prenatal essence for the generation of Zheng Qi. According to TCM theory, Blood, a thick red liquid circulating in circulatory vessels, is viewed as one of the basic substances essential for supporting vital activities in humans. Blood circulation in the body is dependent on the driving action of Qi and it exerts a strong nourishing effect on various organs. The inter-relationship between Qi and Blood exemplifies the importance of a harmony between Yin (Blood) and Yang (Qi) in determining optimal physiological function.

While exhaustive sexual activity and the Yin-Yang imbalance of body functioning can cause an over-consumption of prenatal essence, the maintenance of an optimal Yin-Yang balance for body functions (in particular that of the “Spleen” for digestion and absorption) and a healthy lifestyle (diet and physical exercise) is crucial in acquiring sufficient postnatal essence, and thereby in preserving the prenatal essence in humans. In this regard, the use of Chinese tonifying herbs aims to re-establish the Yin-Yang balance in the body and thereby prevent the over-consumption of prenatal essence. In addition, any internal or external causes of diseases (i.e., pathogenic factors) can be classified as Yin or Yang on the basis of their pathological characteristics. Various modalities of interventions (therapeutic and tonifying) in TCM, including the use of herbal formulations and acupuncture, can also exert Yin/Yang-modulatory actions, thereby producing beneficial effects in Yin/Yang-deficiency disorders (3). While Chinese herbs are broadly divided into therapeutic and tonifying groups in terms of their pharmacological actions, tonifying herbs can be further divided into four functional categories: Yang-invigorating, Yin-nourishing, Qi-invigorating and Blood-enriching, with respect to their mode of action in enhancing physiological functions under sub-optimal body conditions (5). With regard to the Yin-Yang theory, Qi-invigorating and Blood-enriching actions are classified under the Yang and Yin categories, respectively.

Differing modes of action of Yang and Qi-invigorating herbs

Various body functions are dependent on cellular activities, which are manifestations of Yang and Qi. In this regard, mitochondria (the “powerhouse” of the cell) generates ATP that energizes a wide range of cellular activities. To keep up with their ATP generation capacity (ATP-GC), a glutathione-dependent antioxidant system in mitochondria is in place to protect respiratory complexes against reactive oxygen species (ROS) arising from mitochondrial electron transport (6,7). With this in mind, the stimulation of mitochondrial ATP generation by the Yang/Qi-invigorating action of Chinese tonifying herbs may involve an increase in electron transport and/or the induction of a glutathione antioxidant response which can safeguard mitochondrial ATP-GC. 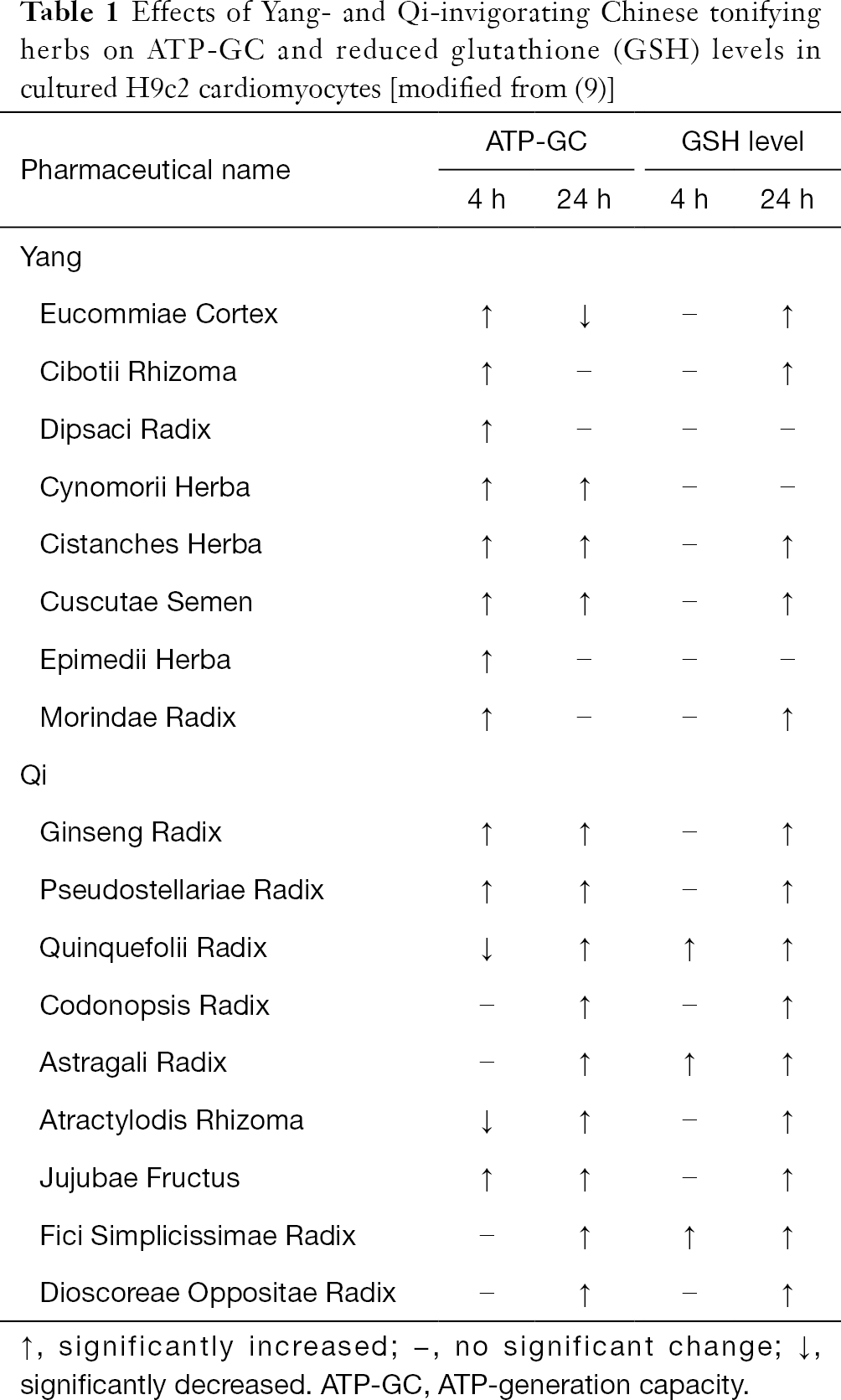 Protection against diabetic cardiomyopathy by Yang/Qi-invigoration

Cardiomyopathy is a major cause of morbidity and mortality in patients with diabetes. Recent studies have shown that mitochondrial dynamics and mitophagy (a cellular event involving the removal of dysfunctional mitochondria are sensitive to nutrient availability and hence their dysregulation is associated with diabetes. As such, the induction of mitochondrial fusion [which is mediated by mitofusin 1 (Mfn1), mitofusin 2 (Mfn2) and optic atrophy 1 (Opa1)] via the up-regulation of Mfn2 was found to alleviate high-fat diet (HFD)-induced insulin resistance and adiposity in diabetic rodents (15). The induction of mitochondrial fusion by incubation with insulin can also enhance energy GC and increase the rate of oxygen consumption in cultured cardiomyocytes (16). In contrast, increased mitochondrial fission [which is mediated by dynamin-related protein 1 (Drp1), mitochondrial fission factor (Mff) and fission 1 (Fis1)] was observed in coronary endothelial cells isolated from diabetic mouse hearts (17). Over-nutrition, as occurs with high glucose and lipid diets, can cause an excessive production of ROS during mitochondrial oxidative phosphorylation in cardiomyocytes, with resultant oxidative damage to mitochondria. An impairment in mitophagy was found to be associated with cardiomyopathy, probably due to an increased number of dysfunctional mitochondria in the heart (18). Mitophagy involves the fusion of fragmented mitochondria with autophagosomes, in which LC-3/p62 are crucial regulators of the process (18). The restoration of mitophagy by pharmacological intervention was found to improve the cardiomyopathy in diabetic mice (19). The aforementioned findings suggest that the control of mitochondrial quality (i.e., functional integrity) is critical in the pathogenesis of cardiomyopathy.

Mitohormesis, which refers to a phenomenon wherein mild oxidative stress in mitochondria can protect the cell/tissue against subsequent perturbations, is proposed to promote longevity and protect against aging-associated diseases (20). For instance, caloric restriction, physical exercise or treatment with phytochemicals have been shown to induce a mitohormetic response via modulating mitochondrion-related and bioenergetics-sensitive signaling regulators, such as 5' adenosine monophosphate-activated protein kinase (AMPK), sirtuin(s) as well as the target of rapamycin (mTOR) (21). AMPK and sirtuin(s), which act antagonistically with mTOR, can activate a number of transcription factors regulating mitochondrial function, such as peroxisome proliferator-activated receptor gamma coactivator (PGC1) α and β, peroxisome proliferator-activated receptors (PPAR) α and γ and Forkhead box O3 (Foxo3) (21). While PGC 1α and β can regulate the expression of Mfn2 (22), which in turn can improve the insulin signaling cascade (15), the induction of PPARα can facilitate fatty acid β-oxidation (23). Emerging evidence has also shown a possible correlation between mitohormetic signaling and the maintenance of mitochondrial functional integrity. As such, recent studies have shown that the activation of PPARγ and/or Foxo3 can induce BNIP3/LC-3/p62-mediated mitophagy in heart tissues (24). In addition, a small degree of mitochondrial uncoupling (i.e., the uncoupling of oxidative phosphorylation) can reduce ROS production in mitochondria and thereby attenuate the oxidative damage. In support of this, a recent study has shown that Nrf2, the master regulator of antioxidant response plays a role in mitohormesis (induced by a small degree of mitochondrial uncoupling) in skeletal muscle of transgenic mice deficient in oxidative phosphorylation capacity (25).

Recent studies in our laboratory have shown that Cistanches Herba and Cynomorii Herba (two Yang-invigorating herbs) can fluidize the mitochondrial inner membrane, causing a small increase in ROS production. This increase in ROS generation can induce a small degree of uncoupling effect which serves as a retrograde signal for the induction of an antioxidant response in the cultured H9c2 cardiomyocytes (26,27). In this connection, the induction of the glutathione-dependent antioxidant response elicited by Cistanches Herba and Cynomorii Herba was found to be associated with cyto- and cardio-protection against oxidative stress in cultured menadione-intoxicated H9c2 cardiomyocytes as well as in ischemic/reperfused rat hearts (26,27). In addition, Cistanches Herba and Cynomorii Herba can induce a mitohormetic response, via activation of the AMPK/PGC-1 pathway. As such, Cistanches Herba can cause a redox-sensitive induction of mitochondrial uncoupling and activation of AMPK/PGC-1 in C2C12 Myotubes and reduce the body weight of HFD-fed obese mice (9). Ursolic acid, the active ingredient of Cynomorii Herba, can induce mitochondrial biogenesis through the activation of AMPK/PGC-1 in C2C12 myotubes and increase the exercise endurance capacity in mice (28). Ginsenoside Rg1, which is one of the active ingredients in Ginseng Radix (a Qi-invigorating herb), was found to reduce oxidative stress and the degree of cardiomyopathy in streptozotocin-injected diabetic rats via the induction of an antioxidant response (29). A Yin-nourishing and Qi-invigorating herbal formula, namely Shengmai San, was found to reduce the extent of myocardial fibrosis in streptozotocin-diabetic rats (30), presumably via the activation of mitohormetic AMPK and sirtuin 1 signaling pathways (31).

Protection against diabetic nephropathy by Yang/Qi-invigoration

The kidneys, which are highly sensitive to hemodynamic and metabolic alterations, are susceptible to microvascular damage in patients with diabetes. Diabetic nephropathy, one of the major microvascular complications of diabetes, is characterized by albuminuria, a reduction in glomerular filtration rate and ultimately a decline in renal functions (i.e., end-stage renal disease) (32). Recent studies have shown that oxidative stress and inflammation arising from hyperglycemia play critical roles in the pathogenesis of diabetic nephropathy (33). As described in the previous section, oxidative stress originates mainly from the excessive production of ROS arising from mitochondrial oxidative phosphorylation. The oxidant-induced damage in the glomerulus can induce leukocyte infiltration, with a resultant inflammatory response (33). Transforming growth factor-β1, one of the pro-inflammatory mediators secreted by renal cells upon interaction with leukocytes, has been identified as the key factor involved in the pathogenesis of diabetic nephropathy (34). TGF-β1 can promote the de-differentiation of epithelial-mesenchymal cells (which normally possess a highly polarized structure for efficient reabsorption of solutes and proteins from the renal tubule into peritubular capillaries), which in turn reduces cell polarity and hence the capability of reabsorption of solutes in the nephron (35). The tubular dysfunction ultimately leads to albuminuria, polyuria and glycosuria. TGF-β1 can also facilitate the accumulation of components of the extracellular matrix (such as collagen, fibronectin and laminin) in the glomerulus, with resultant glomerulosclerosis and tubulointerstitial fibrosis (36).

Recent studies exploring the possible cause-and-effect relationship between oxidative stress and diabetic nephropathy have demonstrated that the induction of a Nrf2-driven antioxidant response can ameliorate pathological manifestations of diabetic nephropathy in experimental animals whereas, conversely, the deletion of the Nrf2 gene can augment the severity of diabetic nephropathy (37). In an effort to attenuate the progression of oxidant-mediated diabetic nephropathy, interventions with antioxidant and anti-inflammatory activity may offer a reasonable approach. Given that both Yang- and Qi-invigorating herbs can induce a glutathione-dependent antioxidant response, they should prove effective in the prevention and/or treatment of diabetic nephropathy. A previous finding in our laboratory has shown that a Yang-invigorating herbal health product (namely, VI-28) can protect against gentamicin-induced nephrotoxicity in rats associated with increases in the level/activities of GSH, superoxide dismutase, Se-glutathione peroxidase and glutathione S-transferases, all of which are regulated by Nrf2 (38). With regard to compounds isolated from Qi-invigorating herbs, ginsenoside Rg1 (alone or in combination with astragaloside IV) can suppress oxidative stress and reduce the severity of nephropathy in streptozotocin-diabetic rats via the inhibition of TGF-β1/Smads signaling cascades (39). Similarly, schisandrin B, an active ingredient isolated from Schisandra Fructus (also regarded as an herb that can invigorate the Qi of the five viscerae), can alleviate hyperglycemia-induced renal injury in streptozotocin-diabetic mice, by suppressing inflammation and oxidative stress (40). 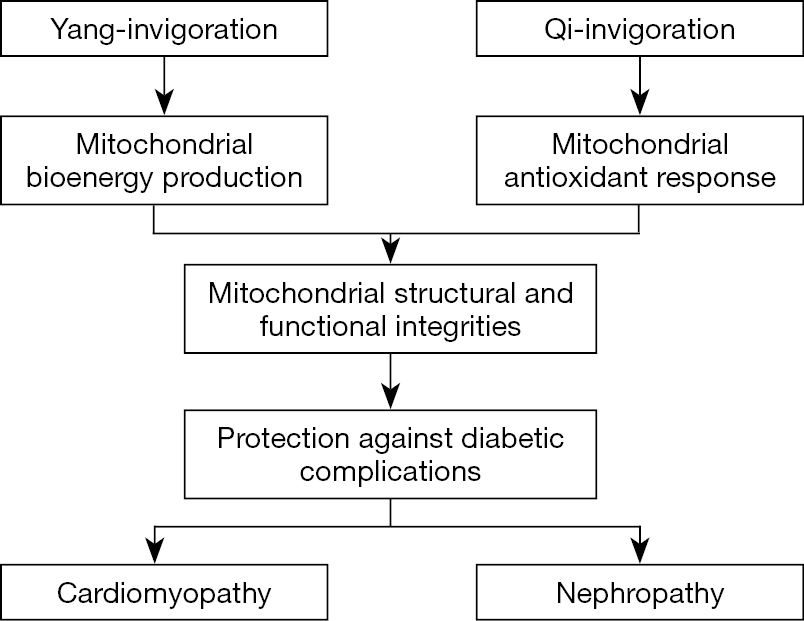