Comparing the physiochemical properties of natural, synthetic and adulterated honeys

Honey is a naturally viscous and sweet substance produced by honey bees from the nectar of flowers or secretions of living plants or excretions of plant-sucking insects on plants that the bees collect and transform with their own salivary enzymes, and then deposit in beehive to ripen and mature (1). It has been consumed as food and medicine by mankind since centuries. The demand for honey is getting increasingly higher, mainly due to the limited supply and remarkable benefits of honey consumption. The benefits are predominantly attributed to the therapeutic effects contributed by bioactive compounds in honey, in addition to its high nutritional level. Therefore, honey is susceptible to adulteration with cheaper sweeteners including syrups and molasses, and sometimes added with a cocktail of chemicals to produce desired colour and bubbles.

Many studies have been conducted to detect adulterated honey in recent years. Different advanced analytical techniques such as spectroscopy, chromatography, differential calorimetry, biosensor, and stable carbon isotope ratio mass spectrometry have been applied (2,3). Each of the methods has its advantages and limitations. The detection of fraudulent honey is mostly focused on the sugar profile. Honey adulteration with sugars has also directly altered the physicochemical and rheological properties of honey.

Gebremariam and Brhane (4) and Ribeiro et al. (5) observed the pH value of adulterated honey would increase if commercial sugars such as corn or cane syrups was added into honey. On the other hand, Oroian et al. (6) reported that the adulteration with hydrolyzed inulin syrup which is acidic in nature would decrease the pH value of honey. According to Naila et al. (7), adulterated honey appeared to be brighter, while pure honey would be more reddish. Anyhow, the colour of honey would also be affected during storage. The colour change is strongly dependent on the temperature of storage and moisture content in honey (8).

There were studies revealing that electrical conductivity was one of the reliable parameters to detect fraudulent honey (9). Honey conductivity is one of the characteristics monitored and recommended by the European Communities to be less than 0.8 mS/cm (10). The limit is applied if 20 g honey is diluted with 100 mL water before measurement. The electrical conductivity is the manifestation of ion movement which is strongly influenced by viscosity and temperature. The viscosity of honey was found to be in a broad range of 18,169 to 2,560 cP at 25 oC (11). Hydroxymethylfurfural is another critical parameter to monitor honey adulteration according to the European Communities. This parameter is also regarded as a quality indicator for honey freshness and thermally over-treated during processing. Previous data on hydroxymethylfurfural in honey reported by worldwide researchers had been collected and statistically analysed by Chua (12) who found that the HMF content was exponentially increased if honey was treated at high temperature (90–100 °C), especially for long duration.

The objective of the present study was to compare the physiochemical properties of natural and synthetic honeys, since honey adulteration is getting serious nowadays. A few rapid assays such as pH, colour, electrical conductivity, viscosity, moisture, total soluble solid, antioxidant capacity and hydroxymethylfurfural content of honey samples were conducted on Tualang honey (natural honey) which is the popular honey in Malaysia, laboratory prepared synthetic honey and market purchased honeys for comparison. We present the following article in accordance with the MDAR reporting checklist (available at http://dx.doi.org/10.21037/lcm-20-30).

The natural Tualang honey was purchased from the Federal Agricultural Marketing Authority (Kuala Nerang, Kedah). Two market honeys which were claimed to be Tualang honey were sourced from the local market. One synthetic honey (100 g) was prepared by dissolving glucose (33.5 g), fructose (40.5 g), sucrose (1.5 g) and maltose (7.5 g) in 17 mL deionized water according to the method described by Cooper et al. (13). The synthetic honey was heated at 100 °C for 6 hours until its colour changed to the dark yellow. The loss of water was replaced for the subsequent experiments.

The pH of samples was determined according to the method described in the International Honey Commission (14). A digital pH meter (Mettler Toledo Delta 320, Shah Alam, Malaysia) was calibrated at room temperature using pH buffer 4 and 7. A 10 g sample was dissolved in 75 mL distilled water. The solution was well mixed before the reading was recorded.

Different concentrations of sample ranged from 20–50% w/v was prepared by dilution with distilled water. The sample solution was filtered with a 0.45 µm nylon filter prior to absorbance measurement using a spectrophotometer (UV1800, Shimadzu, Japan) at 450 and 720 nm (15). The difference of absorbance at both wavelengths is expressed as colour intensity in mAU.

A 2 g sample was placed on a disk and dried in oven at 105 °C for 16 hours (16). The weight of the sample was recorded after constant weight was achieved. The loss was due to the evaporation of water in sample.

The prism of a digital pocket refractometer (Atago Pal-α, China) was cleaned with Kim Wipe. A drop of homogenized honey sample was placed on the prism for measurement. The total soluble solid was measured at 25 °C and the results were expressed in oBrix.

The assay was carried out according to the procedures described by Benzie and Strain (17) who used the principle of reduction of a ferric 2,4,6-tripyridyl-s-triazine complex (Fe3+-TPTZ) to its ferrous, coloured form (Fe2+-TPTZ) in the presence of antioxidants. The reagent contained 2.5 mL of 10 mM TPTZ (2,4,6-tripyridyl-s-triazine) solution in 40 mM HCl, 2.5 mL of 20 mM FeCl3 and 25 mL of 0.3 M acetate buffer at pH 3.6. It was prepared daily and warmed to 37 °C. A 200 µL sample (10%w/v) was mixed with 1.8 mL of the reagent and the absorbance of the reaction mixture was measured spectrophotometrically at 593 nm after incubation at 37 °C for 10 min. The standard solutions of FeSO4·7H2O (100–1,000 µM) were used to construct a calibration curve. The results are expressed as µM Fe2+.

The assay was carried out according to the procedures described by Chua et al. (18) with minor modification. A 100 µL sample (100–600 mg/mL) was mixed with 1.9 mL DPPH (130 µM) in ethanol and 1 mL acetate buffer solution (100 mM, pH 5.5). The mixture was shaken vigorously and left for 90 min at room temperature in the dark place. The absorbance of the solution was measured at 517 nm. The radical scavenging activity was determined based on Eq. [1].

Determination of hydroxymethylfurfural by LC-MS/MS

About 5 g sample was weighed into a 15 mL test tube. The sample was diluted with 5 mL of 0.1% formic acid solution. The solution was stirred for 30 minutes. Then, it was transferred into a separating funnel and added in 10 mL chloroform for liquid-liquid extraction. The solution was left for 30 minutes to form a two layers solution after vigorously shaking. The lower layer of chloroform was transferred out and the remaining solution was washed again with another 10 mL chloroform. The step was repeated three times. The collected chloroform fractions were combined and dried until achieved constant weight. The dried white solid was dissolved in methanol for LC-MS/MS analysis.

A 5 µL sample was injected into an HPLC system (Dionex Corporation Ultimate 3000; Sunnyvale, CA) equipped with a C18 reversed phase XSelect HSS T3 column (2.1 × 100 mm, 2.5 µm) and a QTOF mass spectrometer (AB SCIEX QSTAR Elite; Foster City, CA). A binary gradient system consisted of solvent A (water with 0.1% formic acid) and solvent B (acetonitrile) was used as mobile phase. The mass spectrometer was used to detect the presence of hydroxymethylfurfural using the fragments of m/z 127 (parent ion) and m/z 90 (daughter ion) in the positive ion mode. Nitrogen gas was used for nebulizing (40 psi) and curtain gas (25 psi). The voltage of ion spray was 5,500 V, the declustering potential was 40 V and the focusing potential was set at 250 V. 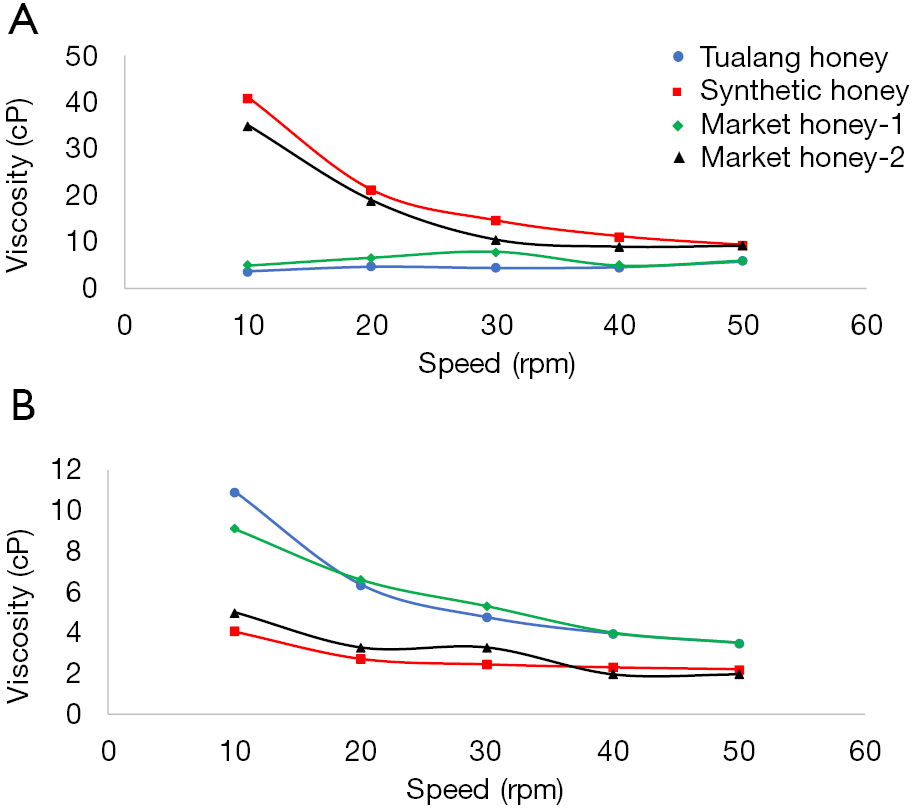 Figure 2 Colour intensity of honeys at the concentration ranged from 2–50% w/v. 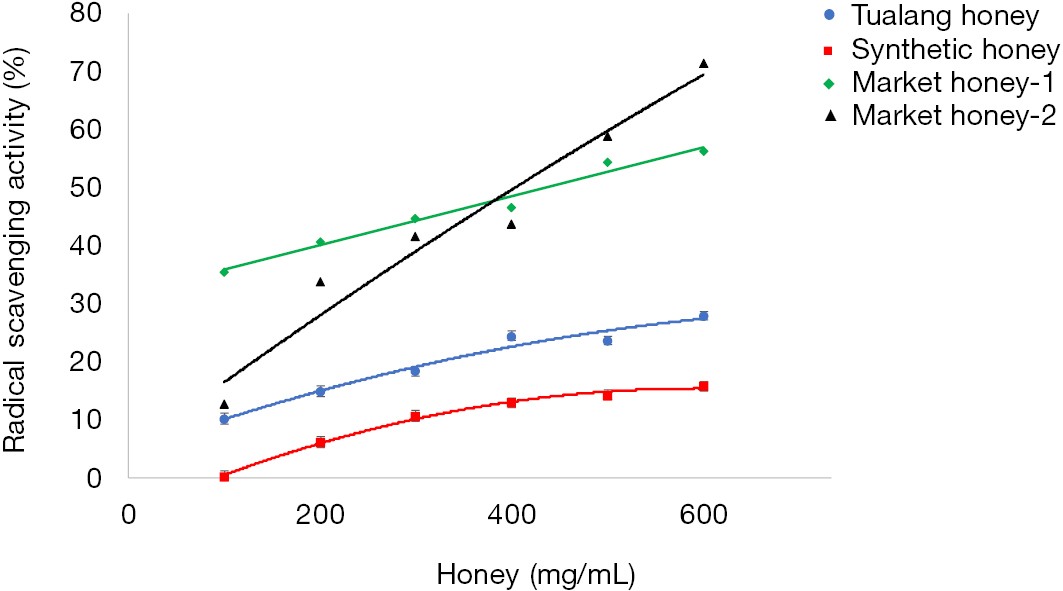 Tualang honey was obviously different from synthetic honey in term of its electrical conductivity, colour, viscosity and hydroxymethylfurfural content. The hydroxymethylfurfural content was also contributed to the reducing power and radical scavenging activity of market honeys. Most probably, the market honeys were mixed with sugar solution and the mixing may involve thermal treatment which contributed to high hydroxymethylfurfural content. The electrical conductivity of market honeys was lower than Tualang honey, but higher than synthetic honey. To conclude, no single physiochemical test is capable to differentiate the natural honey and adulterated honey, especially the mixture of both honeys. However, the combination of the quick assays was able to conform the adulteration of honey satisfactory.

The authors would like to express their appreciation to Nur Ashikin Othman and other internship students for running antioxidant assays during the semester of 2017/2018 in the university.

Reporting Checklist: The authors have completed the MDAR reporting checklist. Available at http://dx.doi.org/10.21037/lcm-20-30

Conflicts of Interest: Both authors have completed the ICMJE uniform disclosure form (available at http://dx.doi.org/10.21037/lcm-20-30). The authors have no conflicts of interest to declare.

Ethical Statement: The authors are accountable for all aspects of the work in ensuring that questions related to the accuracy or integrity of any part of the work are appropriately investigated and resolved.