Several plants widely used in traditional Chinese medicine (TCM), Ayurveda and other traditional medicinal systems, such as Panax ginseng Meyer root, Eleutherococcus senticosus (Rupr. & Maxim.) Maxim. root (ES), Rhodiola rosea L. rhizome and root (RR), Andrographis paniculata L. Nees herb (AP), and Schisandra chinensis (Turcz.) Bail. (berry) (SC), are known for their pleiotropic effects, which are considered to be associated with the adaptogenic activity; that is, an ability to increase adaptability (presumably “xiehuo” in TCM), resilience, and survival of organisms in stress- and aging-related disorders (1-5). This could be due to increasing the “state of non-specific resistance” (6-8), which is negatively associated with the state of increased susceptibility to stressors—“shanghuo” or “re-qi” in TCM—resulting in disease progression due to threatened homeostasis (yin-yang balance) (9,10).

The cytoprotective effect of andrographolide (AND; an active compound of AP), AP, ES, AP-ES combination, and ES-RR-SC combination on the chemotherapy-induced deregulation of gene expression in neuroglia cell culture has been recently demonstrated (36-38). These studies suggest that adaptogens might be useful for preventing and mitigating the toxic effect of chemotherapy in cancer (e.g., in “chemobrain”) (39), but also for reducing oxidative stress-induced cellular damage and detoxification in many inflammatory conditions, including low-grade chronic inflammation (“inflammaging”) in aging (40). Oxidative stress is increasing in aging-related disorders, including atherosclerosis, angiogenesis, and neurodegeneration (40,41). Oxidative stress-induced redox signaling results in cellular response and the activation of defense mechanisms, including the induction of antioxidant and detoxifying enzymes and molecular chaperones (42). Nuclear factor erythroid 2-related factor 2 (Nrf2) is a principal regulator of redox homeostasis, triggering the expression of antioxidant and detoxifying genes, including superoxide dismutase (SOD), glutathione S-transferase (GST), NAD(P)H quinone oxidoreductase-1 (NQO1), and heme oxygenase 1 (HO-1). Therefore, the activation of Nrf2 translocation or the upregulation of gene expression resulting in the activation of the Nrf2 signaling pathway is the key mechanism of cellular defense response associated with the antioxidant and detoxifying effects of medicinal plants (43-46), and particularly of adaptogenic plants, such as AP, RR, SC, and ES (47-71). However, their effect on the expression of genes encoding antioxidant enzymes, phase II and III metabolizing enzymes, and transports, as well on upstream transcription factors, has not been investigated. Therefore, the aim of the present study was to assess the effects of AND, AP, ES, AP-ES combination, and ES-RR-SC combination on chemotherapy [fixed combination 5-fluorouracil, epirubicin, and cyclophosphamide (FEC)]-induced gene expression related to Nrf2 signaling pathways in neuroglia T98G cell culture.

We present the following article in accordance with the MDAR reporting checklist (available at http://dx.doi.org/10.21037/lcm-20-24).

All materials and methods used in the present study have been described in detail in our previously published studies (36-38). The present study is a part of the same study; however, the results have not been published until now. Therefore, only short description of herbal extracts, mRNA microarray hybridization and ingenuity pathway analysis (IPA) is provided below.

Pharmaceutical-grade extracts were manufactured in accordance with the ICHQ7A and European Medical Agency guidelines for good agricultural and collection practice and good manufacturing practice of active pharmaceutical ingredients. Working samples used in the experiments were prepared by diluting dimethylsulfoxide (DMSO) solutions of the extracts with appropriate volumes of phosphate-buffered saline to obtain the same final concentrations of active markers in the incubation media. 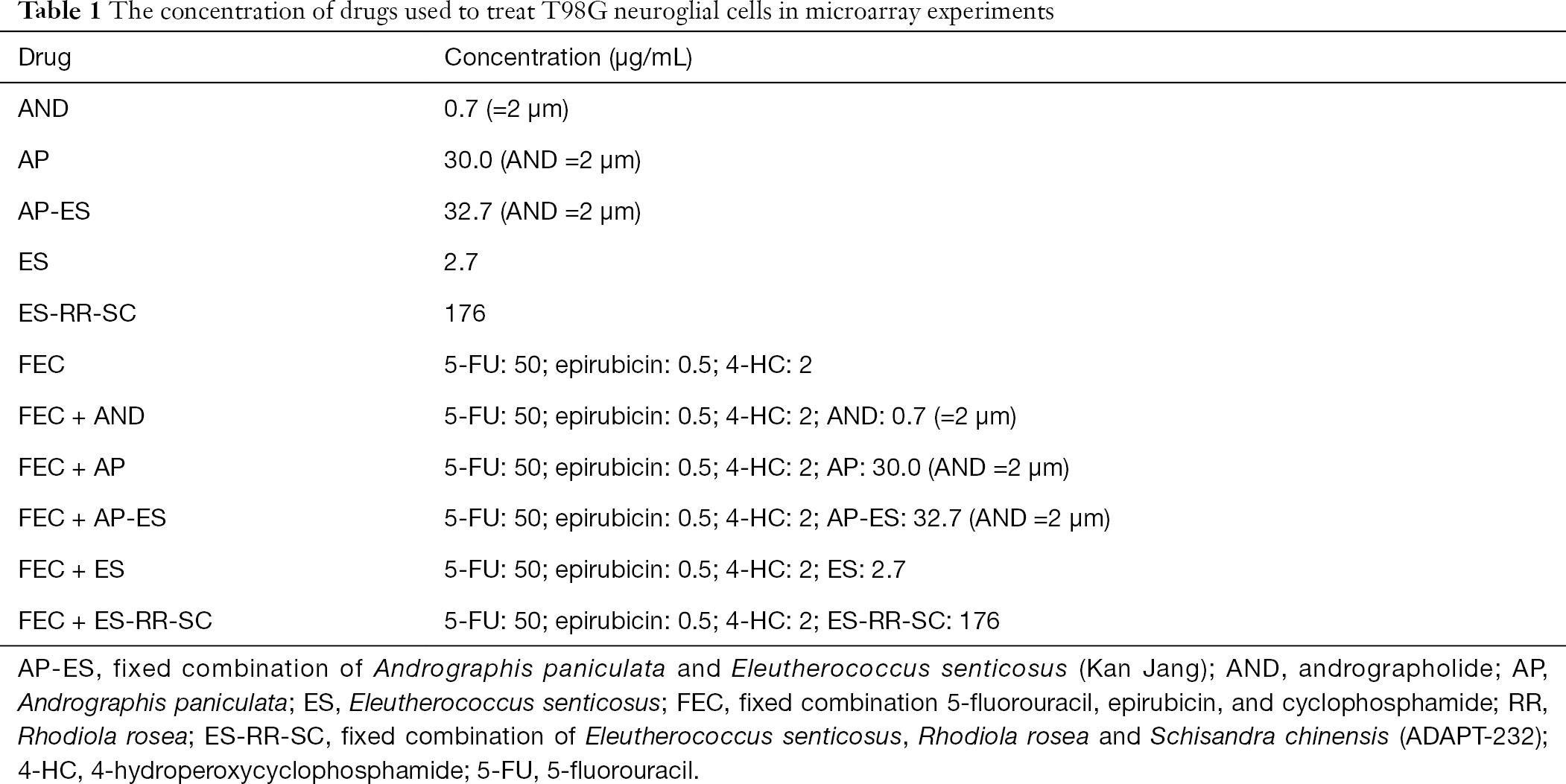 T98G cells were seeded and attached for 24 hours prior to drug treatment. Cells were treated for 24 hours at various combinations and concentrations of drugs or DMSO as the solvent control (0.5%). Total RNA was then isolated using the InviTrap Spin Universal RNA mini kit (250 preps; Stratec Molecular, Germany). RNA concentrations were determined using the NanoDrop spectrophotometer (NanoDrop Technologies, USA). The quality of total RNA was confirmed by gel analysis using the total RNA Nanochip assay on an Agilent 2100 bioanalyzer (Agilent Technologies GmbH, USA). Only samples with RNA index values >8.5 were selected for expression profiling. The experiment was performed in duplicate for treated samples and for control samples by the Genomics and Proteomics Core Facility at the German Cancer Research Center in Heidelberg, Germany. Biotin-labeled cRNA samples for hybridization on Illumina Human HT-12 v4 BeadChip arrays were prepared according to Illumina’s recommended sample labeling procedure based on the modified Eberwine protocol. In brief, 250–500 ng total RNA was used for cDNA synthesis, followed by an amplification/labeling step (in vitro transcription) to synthesize biotin-labeled cRNA according to the MessageAmp II aRNA amplification kit (Ambion, USA). Biotin-16-UTP was purchased from Roche Applied Science. The cRNA was column purified according to the Total Prep RNA amplification kit and eluted in 60–80 µL water. The cRNA quality was controlled using the RNA nanochip assay on an Agilent 2100 bioanalyzer and was spectrophotometrically quantified (NanoDrop). Subsequent hybridization was performed according to the manufacturer’s instruction. Microarray scanning was done using a Beadstation array scanner with the setting adjusted to a scaling factor of 1 and a photomultiplier tube setting of 430. Data extraction was performed for all beads individually, and outliers were removed when the median absolute deviation exceeded 2.5. The mean average signals and standard deviations (SDs) were then calculated for each probe. Data analysis was done by normalization of the signals using the quantile normalization algorithm without background subtraction, and differentially regulated genes were defined by calculating the SD differences of a given probe in a one-by-one comparison of samples or groups. The data were further processed using Chipster software (The Finnish IT Center for Science CSC).

Microarray data were analyzed by IPA (Ingenuity Systems, USA). IPA software relies on the Ingenuity Knowledge Base, a frequently updated database containing biologic and chemical interactions and functional annotations gathered from the literature. In order to obtain information about cellular functions, networks, and affected pathways, IPA offers the Core Analysis tool, which was used for all datasets.

IPA performs different calculations on transcriptomic datasets, including prediction algorithms, and produces results of analyses in a variety of ways, including (I) canonical pathways, which displays the molecules of interest within well-established signaling or metabolic pathways; and (II) upstream analysis, which predicts the upstream regulators (any molecule that can influence the transcription or expression of another molecule) that might be activated or inhibited to explain the expression changes in test datasets.

The interpretation of gene expression data was facilitated by consideration of prior biologic knowledge. IPA software relies on the Ingenuity Knowledge Base, a large gathering of observations with more than 5 million findings manually curated from the biomedical literature or integrated from third-party databases. The network contains 40,000 nodes that represent mammalian genes, molecules, and biologic functions. Nodes are linked by 1,480,000 edges representing experimentally observed cause-effect relationships that relate to gene expression, transcription, activation, molecular metabolism, and binding. Network edges are also associated with a direction (either activating or inhibiting) of the causal effect (72).

To obtain information about the impact of test samples on cellular signaling pathways and networks, for biologic functions and diseases downstream of the genes, whose expression has been altered in a dataset, we used the IPA Core Analysis tool for all tested datasets. Analysis of transcriptomics enabled us to predict regulators that are activated or inhibited based on the distinct up- and downregulation patterns of the expressed genes, and to determine which causal relationships previously reported in the literature are likely to be relevant for the biologic mechanisms underlying the data.

Two statistical methods of analysis of gene expression data were used in IPA: (I) gene-set-enrichment method, where differentially expressed genes are intersected with sets of genes that are associated with a particular biological function or pathway providing an ‘enrichment’ score (Fisher’s exact test P value) that measures overlap of observed and predicted regulated gene sets (73,74); (II) The method that based on previously observed cause-effect relationships related to the direction of effects reported in the literature (75,76) providing so called Z-scores assessing the match of observed and predicted up/down regulation patterns (72). The predicted [Z-score >2; or –log (FET P value) >1.3] effects are based on changes of gene expression in the experimental samples relative to the control.

Microarray-based, transcriptome-wide mRNA expression analyses were performed to identify possible targets of the FEC, herbal extracts, and their fixed combination in T98G cells. 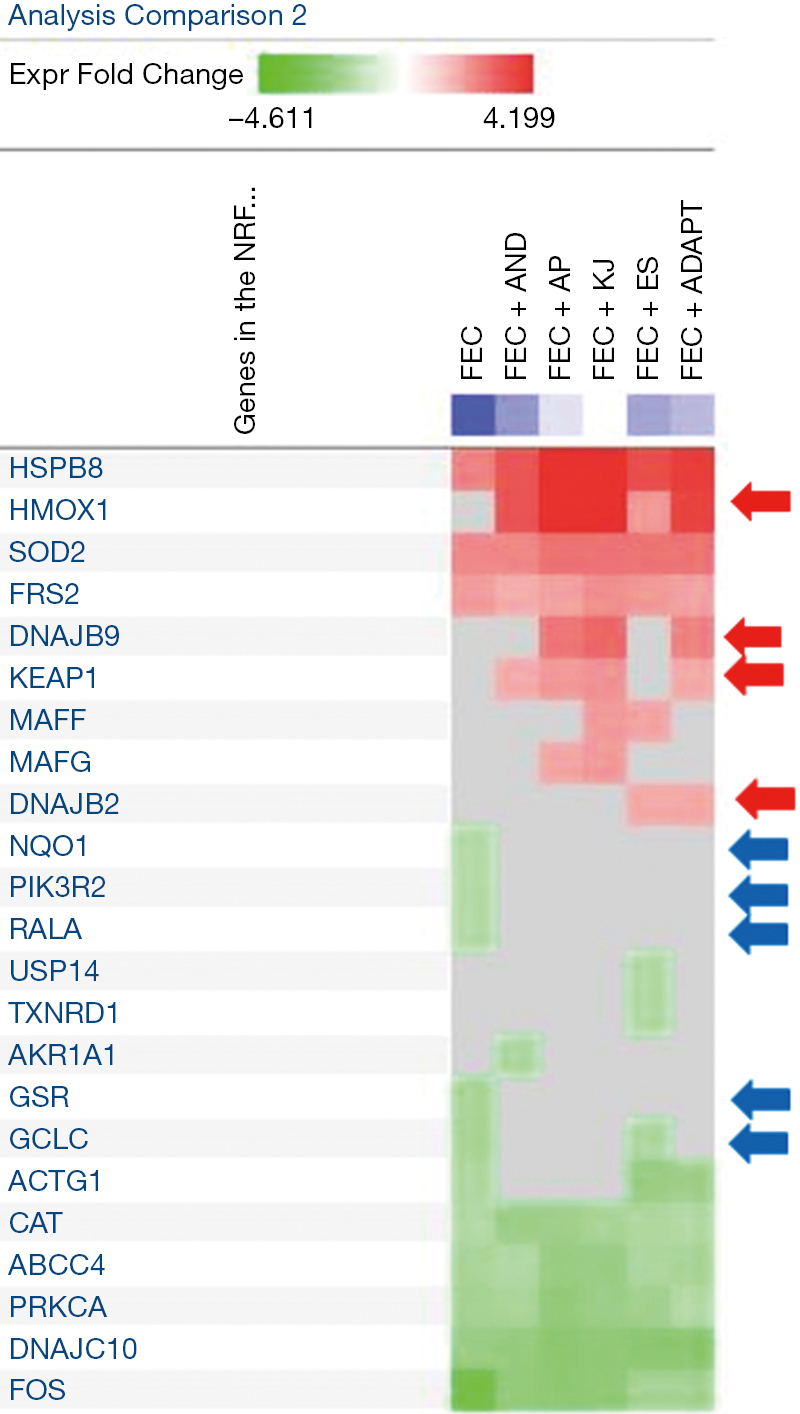 Nrf2 is a principal regulator of redox homeostasis, normally retained in the cytoplasm by KEAP1 (42,77-79). Upon exposure of cells to oxidative stress, Nrf2 is phosphorylated in response to protein kinase C, phosphatidylinositol 3-kinase, and the mitogen-activated protein kinase pathways. After phosphorylation, this complex dissociates, and Nrf2 translocates to the nucleus where it binds with the antioxidant response element (ARE) and triggers the expression of antioxidant and detoxifying genes, including SOD, GST, NQO1, and HMOX1 (42,77). Therefore, the activation of Nrf2 translocation or the upregulation of gene expression resulting in the activation of the Nrf2 mediated signaling pathway is the key mechanism of cellular defense response associated with the antioxidant effects of medicinal plants (43-45), and particularly of adaptogenic plants, which are useful in stress- and aging-related diseases (40,41,78).

Figures 1,2 show that FEC inhibits the Nrf2 signaling pathway via the deregulation of expression of 24 genes, whereas adaptogens prevent or mitigate FEC-induced deregulation of a number of genes involved in the predicted activation of Nrf2-mediated signaling and expression of antioxidant and detoxifying genes, including SOD, GST, NQO1, and HMOX1 (Figures 3,4). 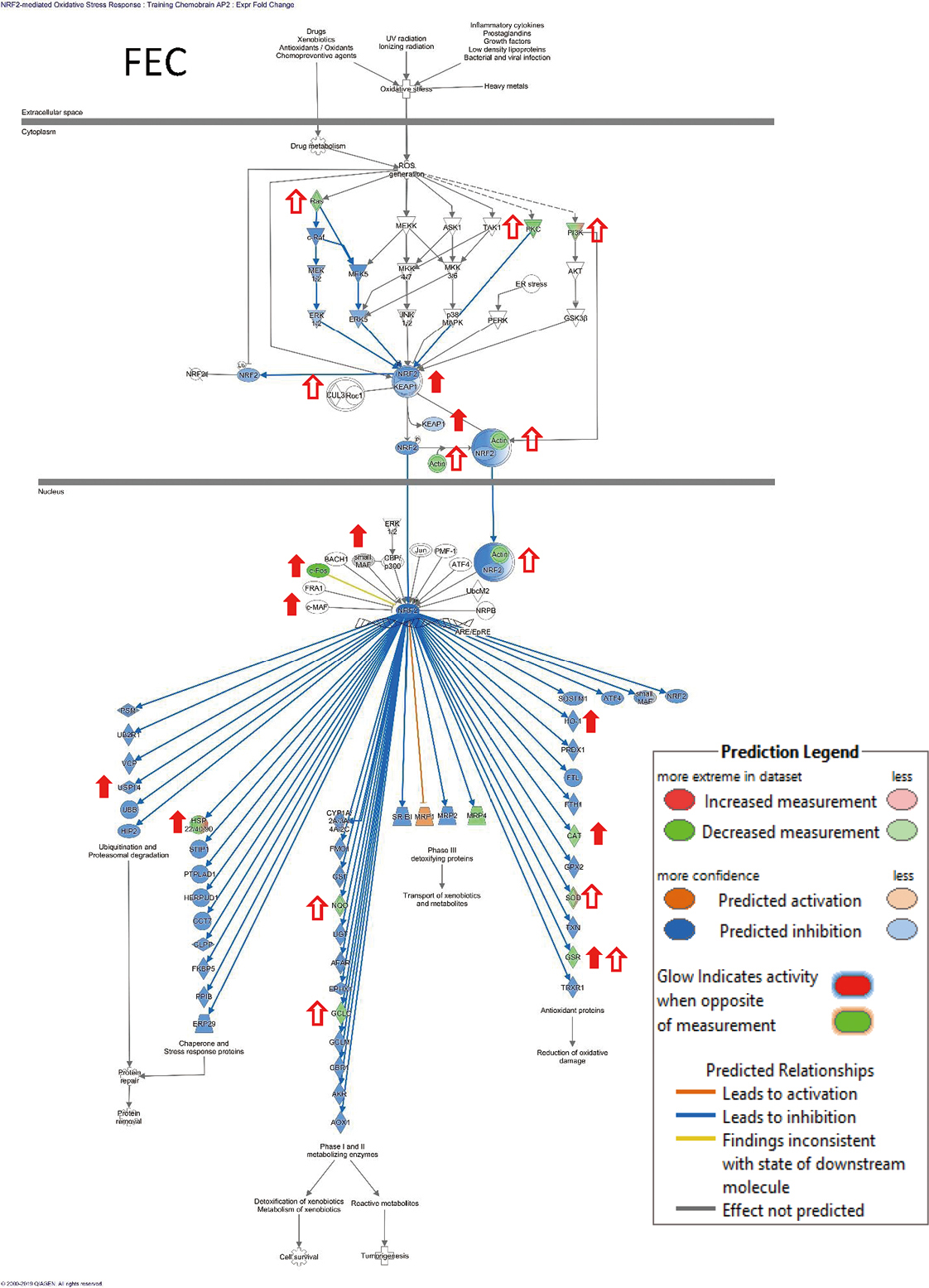 Figure 2 Inhibitory effect of fixed combination 5-fluorouracil, epirubicin, and cyclophosphamide (FEC) and adaptogens on the expression of genes involved in the regulation of the nuclear factor erythroid 2-related factor-2 (Nrf2) signaling pathway. Nrf2 is normally retained in the cytoplasm by association Kelch-like ECH-associated protein-1 (KEAP1). Upon exposure of cells to oxidative stress, Nrf2 is phosphorylated in response to protein kinase C, phosphatidylinositol 3-kinase, and mitogen-activated protein kinase pathways. After phosphorylation, this complex dissociates, and Nrf2 translocates to the nucleus where it binds to the ARE and triggers the expression of antioxidant and detoxifying genes, including superoxide dismutase (SOD), glutathione S-transferase (GST), NAD(P)H quinone oxidoreductase 1 (NQO1), and heme oxygenase 1 (HO-1) (42,77). The mechanism of the cellular defense response (42,43) is associated with the antioxidant effects of medicinal plants (44,45) and particularly of adaptogenic plants, which are useful in stress- and aging-related diseases (40,41,78). Adaptogens prevent or mitigate FEC-induced deregulation of the number of genes (red arrows) involved in the predicted activation of Nrf2-mediated signaling and the expression of antioxidant and detoxifying genes, including SOD, GST, NQO1, and HO-1. 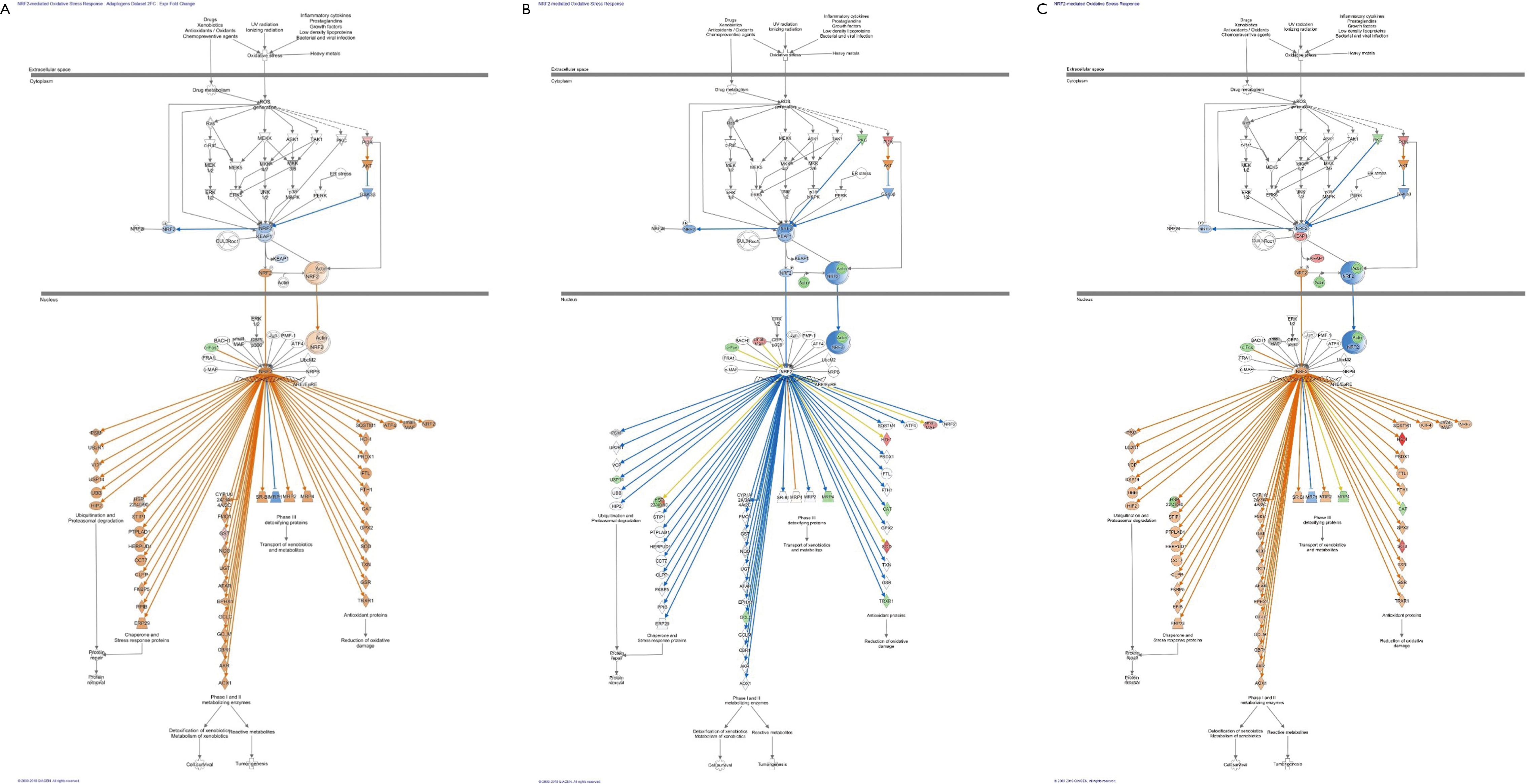 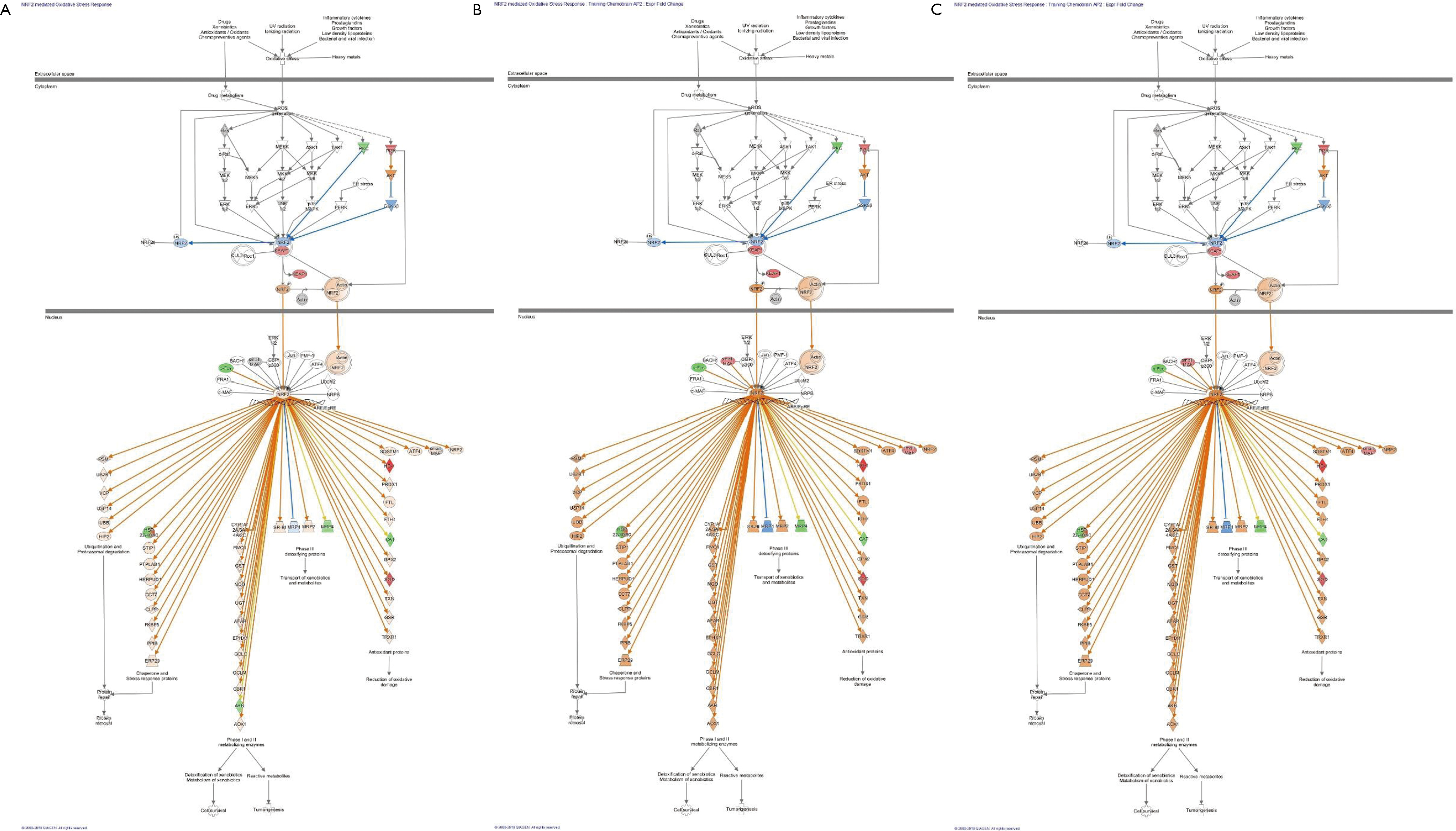 The results of the present study suggest that the beneficial effects of adaptogens on impaired neuronal and cognitive functions are due to mitigating oxidative stress-induced cellular damage by multitarget regulation of redox homeostasis via the regulation of gene expression, activating Nrf2 signaling pathway proteins and modulating antioxidant, metabolizing, and detoxifying enzymes.

The authors acknowledge the support of the Swedish Herbal Institute for supplying the investigational agents used in the present study.

Funding: The present study was partially funded by the Swedish Herbal Institute.

Reporting Checklist: The authors have completed the MDAR reporting checklist. Available at http://dx.doi.org/10.21037/lcm-20-24

Conflicts of Interest: All authors have completed the ICMJE uniform disclosure form (available at http://dx.doi.org/10.21037/lcm-20-24). AP serves as an unpaid editorial board member of Longhua Chinese Medicine from May 2020 to Apr 2022. AP is the head of research and development company Phytomed AB and has an independent contractor agreement with EuroPharma USA. The funders had no role in the design of the study; in the collection, analyses, or interpretation of data, in the writing of the manuscript, or in the decision to publish the results. The other authors have no conflicts of interest to declare.

Ethical Statement: The authors are accountable for all aspects of the work in ensuring that questions related to the accuracy or integrity of any part of the work are appropriately investigated and resolved. The study was conducted in accordance with the Declaration of Helsinki (as revised in 2013). No ethic committee’s approval is required in Germany for in vitro experiments of commercially available T98G human glioblastoma cell line (Merck KGaA, Darmstadt, Germany).